Overcome your Fears to live your Dreams

"If you want to conquer fear, don't sit at home and think about it, go out and get busy"

Alex Honnold is no ordinary man.

Imagine being 3000 feet vertically off the ground. Clinging to a smooth mountain face with your thumb holds and 2 very small indents where your toes barely fill. Sweat rolls down your forehead as you try to plot your next move.

And the climbing rope that’s meant to act as your safety?

You see, Alex is the world’s greatest Free Soloist. It means he makes climbing history without ropes.

Hearing Alex in Free Solo talk about his commitment to continue climbing the way he does (when so many other free soloists have fallen to their death), makes you wonder if he’s insane.

But he isn’t. Alex is methodical about his climbs. He takes months to plan for each climb, works out the routes, climbs those routes repeatedly, and literally goes through the surface contours with a fine brush to remove loose debris dangerous to his rope-less climbs. He lets his well-trained gut tell him when he’s ready to climb without a rope, and in his words:

While most of us won’t be trying Free Soling anytime soon. Watching Alex breaks down his process feels like a Magician revealing secrets of his tricks —  it loses some of its luster, but still feels damn hard to do.

What it does do it put Alex on the same plane as us mere mortals. Perhaps we too can achieve feats of wonder — only if we learn how to conquer our Fears.

Over the years, I started to notice patterns with people who can beat Fear fover and over again. Here’s what I found:

1. Push through the Fear

A big part of working through Fear is getting used to the discomfort.

When you feel that discomfort. Acknowledging the natural fight-or-flight responses in your body.

Choose to rationally and calmly push through it anyway.

Consistently working through despite the Fears helps you build the habit. And over time, you’ll find yourself becoming more like Alex — fear becomes just another emotion you experience, like happiness and sadness, something you can just push through.

2. Put yourself in Fear’s way

Like doing hard things. Conquering one’s fears is more about repetition than once off actions.

For example, after 2 years+ of daily cold showers, I realized:

“I was never going to get used to cold showers”

But I continue the habit. First thing in the morning. Every single Day. Cold days especially.

When I stand there stark (raving) naked, my breath quickens, and the beckoning of a hot shower is only a faucet twist away.

When I choose to turn on the cold water to full blast, this prepares the body and mind to face down anything for the rest of the day. As James Clear says: establishing any habit is all about reinforcing your identity.

Committing to conquering fears daily in the smallest of things, whether a cold shower, or 4:30am gym sessions (see Jocko Willink’s Instagram), it’s all about repeatedly re-defining your identity as:

You are a someone who eats Fear for Breakfast. Everyday.

Afraid of speaking to strangers?
Get out the phone book, randomly dial 100 strangers, and make an effort at good conversation!

Afraid of heights?
Go up to a tall building and force yourself to look down (behind the safety barrier mind you)!

Successful people have a tendency of doing scary things over and over. They don’t back down at the first sign of failure. It’s about the ability to get up from a bad beat (repeatedly), than not feeling fear at all.

I’ve grown more bold, less and less paralyzed by activities that 6 months ago would’ve left me gasping for air, by simply “getting back on the horse” — e.g. learned to ride a bike at 35, regroup after our startup after failed Kickstarter & lost a co-founder.

What more, as a dad. I’m influenced by how much a positive example I can set for my kids. How much I can reinforce the message:

After all, if I’m chasing my dreams with full abandon, and picking myself up again and again, I can only hope some of that rubs off on them.

As long as we learn from our failures, it will continue to build character and inner strength. Fueling an ever more virtuous circle of confidence and boundary-pushing.

"... The credit belongs to the man who is actually in the arena, whose face is marred by dust and sweat and blood; who strives valiantly; who errs, who comes short again and again, because there is no effort without error and shortcoming; but who does actually strive to do the deeds; who knows great enthusiasms, the great devotions; who spends himself in a worthy cause; who at the best knows in the end the triumph of high achievement, and who at the worst, if he fails, at least fails while daring greatly, so that his place shall never be with those cold and timid souls who neither know victory nor defeat."
- Theodore Roosevelt

And when things don’t work?

Take a breather. Pick yourself back up, raise your head and stare Fear square in the face again. That’s how Alex Honnold does it…

I give myself permission to fail

If you are weary of the pressure cooker, sleep deprived pseudo-existence popularised by startup mass media - where apparently every startup founder / man / woman / chihuahua is “crushing it”. Here’s an anti-mantra to set you free... 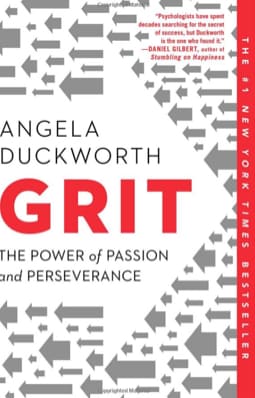 Is talent more important than hard work? Can grit and perseverance really be trained? Angela Duckworth has spent the last 2 decades researching human grit from elite athletes, to entrepreneurs, to school kids. What has she found?